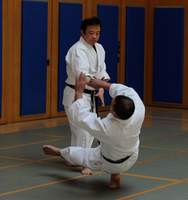 Foundations and Evolutions of Tomiki Aikido

"I'm having difficulty with the throw portion of this jujutsu technique that I'm learning," you remark to a friend whose primary art is judo. You walk through the movements and your friend comments, "That's a cool technique! Let's work on the throw and then integrate it into the overall technique, if you don't mind showing me."

That kind of work could be a game changer!

Most of us miss out on the benefits of training in other martial arts because we think we don't have the time to commit to more than one.  If only we had the opportunity to participate in world class instruction without the cost associated with overseas seminars.  Focused, expert instruction in complementary techniques offers us the potential to raise our game!

To fully understand the common skillsets shared by judo, jujutsu, aikido, look no further than their evolution from their common ancestor - ancient jujitsu.

Would you like to get a hands-on experience with the integration between these styles? The time is now!  Join us for an extraordinary event - Aikido, Judo and Jujutsu Seminar with Satoh Tadayuki Sensei - world renown martial arts expert.
Satoh Sensei is one of the world's leading experts of Tomiki-style aikido. He studied directly with Tomiki Kenji Sensei, founder of the Japan Aikido Association, in the living room of his house, and later at Waseda University. In 2007, Satoh Sensei was granted the position of Shihan of Waseda University Aikido club, a position that had been vacant since Professor Tomiki's death in 1979. Additionally, he teaches aikido at the Japan Police University, and international seminars in the Americas, Europe and throughout Japan.
Also, as an accomplished judoka, Satoh Sensei brings a unique and inspiring perspective to the links between Kodokan judo and aikido. Just a few of his qualifications are:

If you'd like more information about this important seminar, please visit our events page. Space is limited, so you can also go right to registration and get signed up!