What is Nihon Jujitsu? 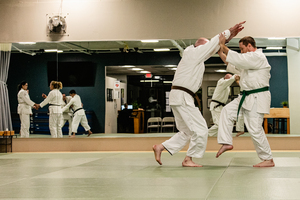 What will you learn in jujitsu from JMAC?

How can jujitsu help you?

Nihon jujitsu is a modern system of jujitsu (sometimes spelled “jujutsu” or “jiu-jitsu”) that focuses on using power and force to control an opponent. Created by Sato Shizuya after WWII, Nihon jujitsu uses techniques mixed from ancient and present-day martial arts, as well as Japanese self-defense methods. According to the International Nihon Jujutsu Association, “the core curriculum of Nihon Jujutsu incorporates the practical, decisive throwing, choking, and immobilization methods of judo; the entering and striking of aikibujutsu; the restraining techniques of taihojutsu; and taisabaki (evasive movement), open hand, and armed self-defense principles.”

Philosophically, Nihon jujitsu shares with judo the principle that martial arts should be practiced as a catalyst for personal growth. We teach Nihon jujitsu at JMAC and believe you can develop yourself by practicing regularly. Here are some techniques you’ll learn and how training can help you physically and mentally.

Evasion – The philosophy of jujitsu includes using your skills responsibly. Jujitsu techniques can seriously hurt your attacker, so fight back only when necessary. We’ll teach you how to evade attacks safely.

Joint locks & chokes – Joint locks and chokes manipulate the weak points of the body and can disable your attacker or force them to submit. Joint locks extend the joint almost to inversion. Your opponent will realize if they move further, they’ll be severely hurt, which is why they usually shut down and end their attack. An example a joint lock is Ude Kujiki Osae (elbow locking takedown), which puts pressure on the back of the elbow, causing your opponent pain and allowing you to bring them to the ground. The neck is a weak point of the body, too. Chokeholds are meant to cut off blood supply to the brain or air to lungs, forcing your opponent to tap out or become unconscious. Remember these techniques should be used in responsible ways, so we’ll teach you how to do a chokehold without causing serious injury to your opponent.

How can jujitsu benefit you?

Jujitsu is a great method of self-defense because it doesn’t focus on strength, rather it attacks the already weak points of your attacker. Once you’ve memorized the kata or individual forms, you’ll be able to react more swiftly to attacks, which could save your life.

Do you want to be more fit? Jujitsu is a great way to exercise. By training regularly, you’ll develop better speed, balance and power.

As previously mentioned, jujitsu can help with personal development. Practicing kata can help you become more focused, and training consistently can help with discipline. Your confidence is also expected to improve! Not only will performing well and getting new belts help your confidence, but overcoming your weaknesses will literally make you mentally stronger.

Learn more about jujitsu at JMAC.

While training at JMAC, you’ll learn the fundamentals like stepping, striking, and parrying combined with the techniques above. Once you have the basics down, you’ll do "live" training, where one or more opponents attack and you’ll respond, gradually increasing in complexity and speed. With the many benefits of jujitsu, your body, mind, and spirit will thank you!