A Brief History of Grappling Arts 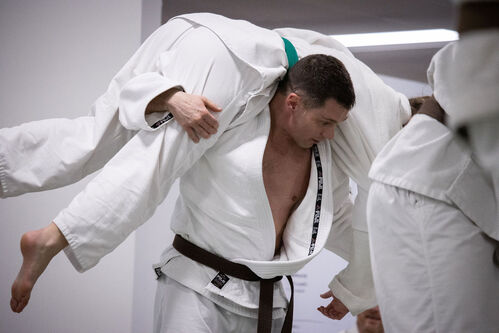 Do you want to increase your strength?

Are you looking for self-defense training?

Fighting systems that use grappling may be right for you!

Grappling is a concept in combat sports that consist of grabbing and manipulating the opponent. Grappling moves include takedowns, throws, holds, and sweeps, but no striking moves like punching and kicking. Grappling works well for up-close combat and self-defense.

Here are a few fighting systems that use grappling:

Judo – Judo is a Japanese martial art based on the principle that a smaller person can take on a larger, stronger opponent with the right skills. Judo was formed by Jigoro Kano in 1882 and uses throws, takedowns, chokes, and joint locks. Most throws require grabbing the opponent’s gi. To win a judo match, you can perform an ippon - throwing the opponent down on their back - make the opponent submit, or score the most points by performing throws, locks, and holds.

Ssireum – Ssireum is a Korean grappling sport that takes place in a sand pit. You and your opponent’s hands are linked by belts at each other’s waists and thighs. The goal is to throw the opponent off balance and have any part of their body above the knee touch the ground. Ssireum began in the fourth century and is now a national sport in Korea.

Wrestling – Wrestling is a worldwide sport focused only on grappling and is the oldest form of combat. There are even cave drawings of people wrestling! The goal in wrestling is to get your opponent to fall or pin them so they can’t move. There are three types of wrestling: freestyle, Greco-Roman, and Folkstyle. No joint locks or chokes are allowed, only throws and pins.

Sambo – Sambo is a Russian martial arts style that was taught to Soviet Union soldiers in the 1920s. It was created by Viktor Spriridonov and Vasili Oshchepkov. Sambo has parallels to judo considering Oshchepkov was a judo student under Jigoro Kano! There are two types of Sambo: Combat Sambo – similar to current day mixed martial arts fighting and requires protective gear, and Sports Sambo – similar to wrestling and judo. The goal in a Sambo match is to get 12 points, which are awarded for throws and pins. You can win faster by performing a total throw - making opponent fall on their back while you’re still standing - or by making your opponent submit.

Shuai Chiao – Shuai Chiao, sometimes spelled Shuai Jiao, is the most ancient Chinese martial art. It was first used by the Chinese military in 2697 B.C. and used to feature more violent moves, like striking, joint locks, and even bone breaking and joint dislocation. Now Shuai Chiao focuses more on grappling. The goal is to throw opponent to ground while you’re still standing, or to fall with them, but end up on top of them.

Does grappling sound fun to you?

It certainly can be! Judo free practice, called randori, is considered to be “play” by many judo students because it’s so much fun!

Are you nervous about long term contracts?

You can sign up for a 2-month trial membership at JMAC to make sure judo is right for you!