How the Ranking System Works

How can you keep improving beyond black belt?

The majority of martial arts use a colored belt system to show your rank. Legend has it that as people trained, their white belts got covered in sweat, blood, and stains, getting darker over time until eventually turning black. These belts weren’t allowed to be washed because it would “wash the experience off.”

This is just a tall tale handed down to students. The real story begins with creator of judo, Jigoro Kano. The previous ranking system was called menkyo, and martial artists only received a certificate when they ranked. Kano wanted to create a visual display of rank and was influenced by Go – a Chinese strategy game, and advanced Japanese swimmers who wore black ribbons around their waists. In 1883, Kano created the Dan system, which would have two sections – kyu and dan. Kyu students (also referred to as mudansha – people without dan) would have white belts and those with dan (teachers and advanced students) would have black belts.

While the dan system began for judo, it spread to other martial arts including in China and Korea. The practice of using more than two colored belts began in France where judo master Kawaishi Mikonosuke was teaching. Mikonosuke found multiple-colored belts helped his students see their progress and gave them something to work toward.

The exact order and number of belt colors depends on martial art or school. The general color order is:

After receiving a black belt, you become a yudansha – a person with dan. Ranking doesn’t end here. There are a possible 10 dan rankings.

Dan means “step” or “stage” in Japanese. When you first receive a black belt, you are at shodan - first dan - rank. 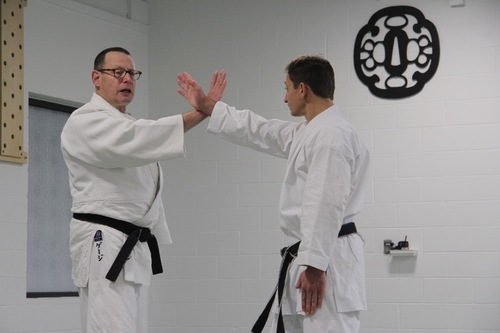 What do the different dans mean? If you’ve received shodan rank, you’ve mastered the basics of the style. At sandan, you can start teaching with your sensei’s supervision. At godan, you can get your full teaching license. The higher the dan, the more leadership and teaching experience you’ll need to be promoted.

How to Increase Your Rank

To move up in the kyu class, you have to test at your dojo. This involves testing your skills in front your sensei to see if you’ve mastered what you’ve learned. To move up in the dan class, you can test with martial arts associations, such as the Shudokan Martial Arts Association, which can provide authentic Japanese rank and teaching titles.

Do you want to increase your strength, speed, and balance while working toward new belts?

Practicing martial arts in Ann Arbor has many non-physical benefits too! You will increase your confidence, focus, and self-discipline, all while having fun.

If you’re ready to get started, contact us today!