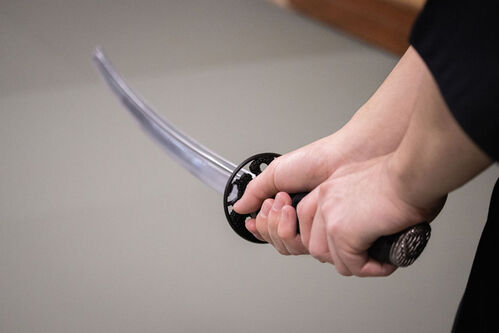 The bushi – occupational warriors in feudal Japan - used many weapons while fighting.

So why do we see so few weapons in many martial arts dojos?

What Type of Weapons did the Bushi Use? Koryu Bujutsu

Naginata – The naginata is a long, slightly curved blade mounted on a long pole. They were used to stab and strike on the battlefield. The koryu bujutsu martial arts style that utilized naginatas is called naginatajutsu.

Yari – The yari is a long spear that has different types of blades. The most common blade was flat and sharp on both sides like a dagger. Yaris were used for cutting and stabbing and practiced in sojutsu.

Tanto – The tanto is a dagger with a long blade and short handle used for slashing and stabbing. The bushi used them in tantojutsu.

What Weapons Can You Use in Gendai Budo?

Katana – The katana is a sword with a long, curved, single-edged blade and is meant to be held with two hands. In iaido, you’ll practice first with a wooden sword called a bokken, then with an alloy sword called an iaito. Advanced students can practice with a shinken – sharp edged sword – like a katana. Katanas were meant to cut down enemies in one smooth movement.

Yumi – A yumi is a longbow used in the art of Kyudo – Japanese archery. The bows are much larger than the kind used in Western archery, and the arrows - called "ya" - are made from bamboo. Bushi warriors also used bows in early battles, but later, during the Edo period, kyudo began being studied as a modern martial art to aid in physical and spiritual development.

Work with Weapons When You Practice Iaido in Ann Arbor

Working with weapons is fun!

You can practice martial arts with weapons by studying iaido at JMAC.

Did you know iaido can be done by almost anyone? Adults of any experience, or skill are welcome in our programs!