Everyone needs exercise. It’s imperative to get out there and move and get your heart rate up! Fitness doesn’t have to mean ripped muscles and a sculpted physique … although it can if that’s what you want. Getting movement into your daily routine as well as a balanced healthy diet that is right for you is key for men and women who want to improve their fitness. Where do you start? How do you decide which martial art is right for you?

The best way to learn about JMAC and the styles we teach is to come visit one of our classes. You’ll see martial arts we teach and you can choose which one suits you best! 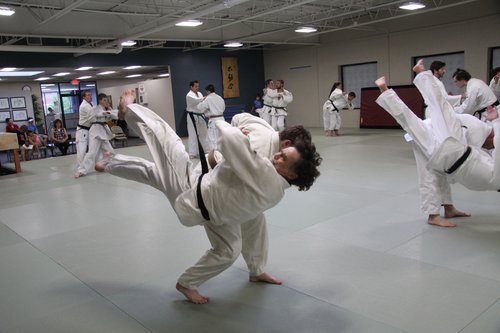 Perfect for men, women, and kids who like a more competitive experience. Judo helps you learn to throw, grapple, and compete. You get physically fit, and improve your overall physicality while learning fast-paced, challenging martial arts skills.

Nihon Jujutsu is a modern Japanese system of self-defense, fitness, and personal development. It's based on techniques found in both ancient and modern Japanese styles of combat. You’ll learn joint locks, submissions, take-downs and throws, while exercising your mind and your body.

An off-shoot of kenjiutsu, Iaido was originally developed as a method of defense against attacks or raids in sixteenth-century Japan. It’s great for improved balance and bodily awareness, but the real heart of iaido is in the incredible mindfulness training it offers. Plus … swords!

Karate is also great for women looking for better fitness in Ann Arbor. It’s an active martial art meaning you’ll move a lot and sweat while learning traditional Japanese striking, kicking, blocking and movement. Where else can you meet new best friends and punch them three times a week?

Deciding where to train and what style to train in is an important decision. You want a challenge that helps you reach your fitness goals but you also want to enjoy yourself. Take a look at our schedule, and give us a call at 734-720-0330, or stop in to watch a class!