Martial Arts and the Magic of Persistance 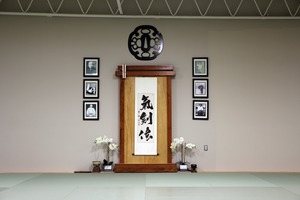 Sometimes just sticking with a thing is enough to separate yourself from the crowd.

If you've been in the traditional martial arts for any length of time, you've heard your teacher mention how many of the best aspects of training come only after years or decade of persistence.

Sometimes it's about sticking with what you're doing even for a few years, and then taking time to reflect on how far you've come.

I opened JMAC in 2006 because I couldn't find a dojo in the Midwest that offered world class judo and jujutsu. Two years later we were one of the notable dojos in Ann Arbor. We weren't intentionally competing with other martial arts schools, but by the end of 2009, two nearby schools had gone out of business, several had moved, and the array of clubs and informal martial arts groups had changed considerably. All we did was keep offering exceptional training and welcoming new students into our classes. Now, ten years later, we're an established program in our region with an extraordinary facility. We host 2-3 of the best system leaders from Japan each year and continue to grow and deepen our knowledge. The scene in our town has changed drastically and, in one sense, all we did was stick with what we love to do.

Training's Not So Different

Half of success is showing up. Half is working hard. And the third half is finding a way to track your progress to make sure you're moving toward your goals in meaningful ways. I put it that way for a reason...

If you just stick with your martial art long enough, you'll outstrip everybody who quits, everybody who dabbles, many of those who also stick with it, and a few of those who show up AND who work hard. But the truth is, very, very few people who train in martial arts - even those who do stay with it for two or three decades or more - truly set goals and take meaningful steps to track their progress. Those few who do (and who use the information to keep improving both their skills and their training methods) become the exceptional martial artists: the role models, the tournament champions, the teachers ... the bright lights that show us what's possible if we would only bring all of ourselves to what we do.

As you may know, I seek out great teachers, inspirers, high performers, charismatic people and motivators. Besides studying with some of the greatest martial artists of the 20th Century, I've read and listened to people like Tony Robbins, Brendon Burchard, Deepak Chopra, Warren Buffett, and many, many more. These people have an incredible amount to offer, but there's something about the martial artists who have devoted their entire lives to learning, perfecting, and passing on profound secrets of the Japanese arts that resonates with me and many people I hang around with.

I think one reason the true masters of the martial arts convey a unique power is their integrity. To stay with a path that is composed of hard work, pain, humility and very little financial gain takes a special character. Even if that character isn't present at the start, it often emerges over the decades required to understand and internalize the principles of legitimate heritage martial arts. You have to be in it for its own sake. If you get a little money or fame doing it that's nice, but at its core the thing you love is the thing itself, and that shines through when it's true. 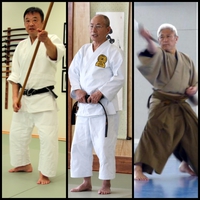 I've been very, very lucky to have trained with or met some extraordinary martial artists. I've been in the room with Shioda Gozo of Yoshinkan Aikido, Yasuhiro Yamashita of Olympic judo fame, Kawabata Terutaka of Jigen-Ryu, Otsuka Hironori, son of the founder of Wado-Ryu Karate, and my own iaido teacher, Yamaguchi Katsuo, Meijin 10th Dan, just to name a few. Holy crap, it feels crazy to write those names when you think of tens of thousands of martial artists whose lives they've affected for the better.

So when I say that there are only three living Japanese masters I care to train with anymore, I hope the context for that statement is clear. I've searched the world over for new mentors and, among those living, training and teaching in Japan, only three make the cut for me.

One is Nobetsu Tadanori, an exemplar of a life lived in Goju-Ryu Karate. He's extraordinarily talented, kind, and humble, and has thousands of students in Japan and around the world keeping his legacy alive. Another is Satoh Tadayuki, one of the world's leading aikido experts. He was taught by Tomiki Kenji Sensei and is currently Shihan of aikido at Waseda University Aikido club.

The third is perhaps lesser known except among the cognoscenti of koryu ... Yahagi Kunikazu, soke of Ryushin Shouchi Ryu. His art is an evolution of Kawabata-Sensei's Jigen-Ryu ... dynamic, powerful methods for employing the Japanese sword ... an art that includes not just great cutting techniques but also breathing methods, presence, and that wonderful ineffable power and humility that only legitimate heritage martial arts from Japan seem to create.

In my opinion (be it ever so humble), every serious martial artist should have a little training with these three men on their resume´ ... if you want to be a jedi, you have to know what it feels like to be in the room with a jedi, and if you want to be a martial arts master in the true sense of the word, you have to train in the room with a real Japanese master to try to soak up the essence of what that means.

I've already started training to make sure I'm in the right condition in both body and mind to absorb all I can from Yahagi-Sensei's teachings. For me, that's just part of striving for the extraordinary every day ... envisioning greatness, planning, preparation, training, evaluating, and improving.

Remember, the kind of day you're having may depend on the world, but how you deal with it totally depends on you. If you have an exceptional mindset, you'll lead an exceptional life. I'd love to hear what this means to you!