Martial Arts and Self Defense 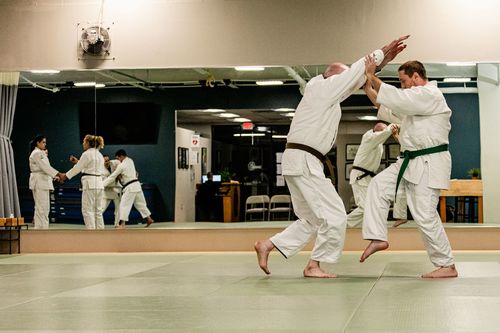 Are you looking for a practical form of martial arts?

Do you want to learn how to defend yourself?

There are many different styles of martial arts, so finding the right one for you is very important. Understanding what you’re looking for in a program can help make your journey more fulfilling. If you're interested in competing, judo might be the best choice. If you want to learn how to use a sword (who doesn’t?), iaido should be your choice. But, if you want to learn proper self defense, then jujutsu or judo might be for you.

How Jujutsu Teaches Effective Self Defense

During ancient combat, running out of arrows or losing a sword was a possibility, so combatants sometimes had to defend themselves without weapons. According to Survivor’s Fortress, “jujutsu thus was developed for the samurai to protect themselves if they were ever unarmed against an opponent.” Used correctly, jujutsu could be nearly as powerful as armed combat.

Technically speaking, jujutsu is a combination of throws, strikes, joint manipulation, and counterattacks. By focusing on leverage, momentum, and balance instead of pure strength, you can learn a very functional system of self-defense. Applying force to weak points on an assailant’s body can render them helpless while minimizing injury. This responsible form of combat is simple but effective.

Judo As a Form of Self Defense

Judo is a more physically demanding style of martial arts, combining throws, groundwork and conditioning. Judo is made up of three different facets: randori (free practice), kata (forms) and competition. Randori includes throws, pins, grappling, and joint locks, and allows judo players to try their techniques in real time. Kata practice focuses on predetermined techniques to increase your mental focus, discipline, and understanding of movement principles. In competition, you can enter tournaments and test your skills against others. JMAC has produced local, regional and national champions.

Some skills from judo can be used to protect yourself as well. In a close-range combat scenario, an attacker might find themselves on the ground, looking up at the judo player they tried to injure!

If you’re ready to begin your self defense journey today, check out JMAC!

At the Japanese Martial Arts Center, you’ll learn the focus, and discipline that jujutsu and judo teach while learning to protect yourself. You’ll be taught the fundamentals of evasion, strikes, and throws while effectively using force and reducing the risk of injury.