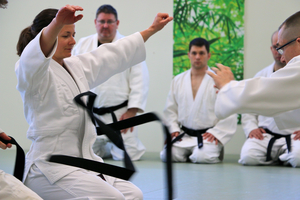 Andrea Derler is a powerhouse. She knows German and English, and has international experience in Austria, Germany, the United Kingdom, and the United States.

During the day, she is a consultant associate for LEAD Institute and hosts leadership workshops through Washtenaw Community College. She is a PhD candidate in Economics, with a focus on Leadership and Organizational Development.

At night, she dons her jujutsu gi and black belt. 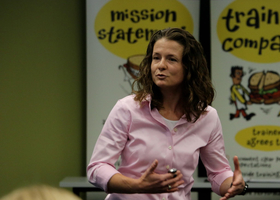 Andrea teaching during a Chaos to Kata seminar!

The following article is an excerpt of the exclusive interview:

Q. What first got you into martial arts? Why did you choose Nihon Jiujitsu?

I started martial arts, because it was something I always wanted to do. I just was never in a place to do it. Really, Nihon Jiujitsu was a coincidence! The classes lined up with my schedule on Tuesdays and Thursdays, and my husband exercises on the other days of the week.

I had no idea what it was. I didn’t take intro lessons or anything. I wanted in. I came in and told Sensei that I had my mind set on training. I liked the idea of exercise and self defense mixed with the gentleness of the martial art.

Q. And you started six years ago? 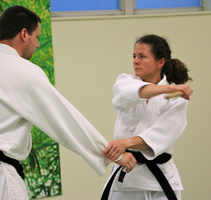 Q. Less than 2% of people who come to the Japanese Martial Arts Center go on to earn a black belt. What has your mindset been as you have done martial arts?

It’s a mindset of passion. If you love something, you just can’t stop. The black belt is not something I’m particularly proud of. It was certainly something to strive for, but I was more interested in the mastery of the martial arts. Getting up to the black belt simply means that I know the basics.

Q. What is the most important lesson you have learned during your martial arts journey?

That I can overcome my glass ceiling. In the past four to five years, anytime I encountered a difficult throw or roll on the mat, instead of telling myself I can’t do it, or I’m too scared to do it… I find that glass ceiling, but Suino-sensei always tells me I can. And I do. It is possible, you just can’t give up.

Q. What have been your biggest challenges in martial arts?

Q. How about size differences? You work out with some bigger guys!

Rolling with the bigger guys isn’t a challenge to me, because it’s a matter of figuring what kind of throw to use on them. 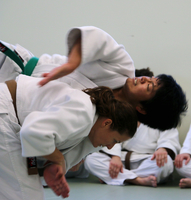 Q. How have martial arts carried over into your professional or personal life?

There is always that glass ceiling, like the one that I talked about. You can’t run away. I have figured out that I must approach head-on. For example, the sacrifice throw was very scary for me. I could either back away from it or do it. So, I went at it straight away and worked on it. Encountering these fears has helped me realize that I can’t back away from them. Running away doesn’t help; it makes the fear worse. I have learned over time to become stronger in overcoming these fears.

Q. Your most recent project is Chaos to Kata, a leadership seminar that is a synergy of martial arts and the business world. What was your inspiration for the project? How did it come about?

I always saw benefits in the business world in the way Suino-Sensei teaches martial arts. Everything didn’t click until Sato-Sensei came to the dojo. There was a concept he mentioned. His English wasn’t very good, but he said a word… mushin. It was very short, but you could see that there was a lot of meaning behind it. His translator described it was a word that describes approaching a situation without bias.

Six months later, Suino-sensei and I met over lunch, and discussed it. Suino-sensei developed the kata. The process of developing the project worked well because we work in very different ways that complement each other. I’m very efficient and he is a visionary. I had the basic idea, but he brought it forward with ideas to generate the seminar. 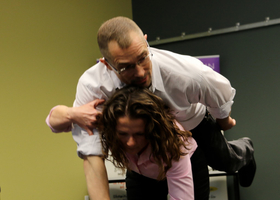 Q. Have you personally used the kata?

I had a first time meeting with a CEO where I worked. He was 65, and we worked in a very patriarchal environment. He was very patronizing. The first thing he said to me was, “You lucky thing.” I physically made space from him, and went back to my seat to collect my thoughts. Eventually, instead of not speaking at all during the meeting, because it is my weakness not to act and withdraw, I began making comments during the meeting. I had to act. At some point, it was a matter of the management of his personality. I started to jump in, summarizing what he said, and saying, “Thank very much for that, and now to add to what you said…” It wasn’t because he was convinced that I was right, but it was more to establish myself as a viable voice at the table.

Q. What was his response?

Q. What’s another way you use the kata?

Generally, when I get worried about things, especially in the long-term, I use the kata. There is a lot of chaos in the future. For example, I am about to move, and I was initially very sad and disappointed. However, I need to create space from my emotions. So, I created space by not thinking about it for a while. I put it in a box and created distance. Then, it came to the point where I could approach it and analyze it without emotions or prejudice. From there, I could begin to act. I looked for schools, analyzed the community. I got a job there. I began to see the good that could come of it.

The kata has helped me overcome the emotional turmoil and approach the situation in a constructive manner. 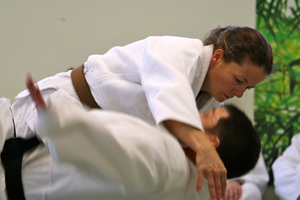 Andrea during her black belt test 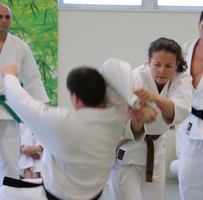 Circle of Death! Nearing the end of her black belt test. 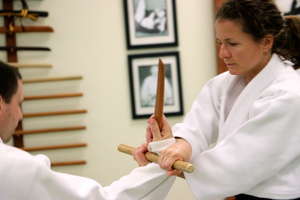