Do you ever wonder what kind of advantages you afford you child when you enroll him or her in a martial arts class? Ann Arbor has many resources that promote the learning and development of kids, including your local dojo! Check out these fun factoids to learn how martial arts benefit your kid!

According to the National Association for Sport and Physical Education (NASPE), these are the following guidelines for daily activity. Visual created by the Japanese Martial Arts Center.

A martial arts class is a great way to get exercise in! According to Kids Health, kids who regularly exercise will:

According to a study, children who exercise less during the day take longer to fall asleep at night. In the Archives of Disease in Childhood, it was reported that every hour of the day children are inactive adds three minutes to the time it takes them to sleep.

One study found that girls and minorities are the most likely to be obese and inactive. In a martial arts program, students of ALL backgrounds are encouraged to practice. Children are invited to work in an inclusive and open environment!

Another study found that when students have fun with their peers, they’re more likely to exercise. We’re not sure how to measure our students’ happiness, but we have some pretty anecdotal evidence.

Less Likely to Become Obese When They're Adolescents and Adults

Studies have shown that a child who is obese between the ages of 10 and 13 has an 80% chance of becoming an obese adult. 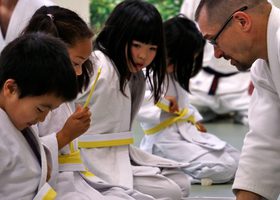 A belt promotion during our martial arts class (Ann Arbor)

In the International Journal of Sport Psychology, researchers found that exercise contributed to disease prevention and health promotion.

Better Focus and Memory in School

Martial arts help make your kid feel happier! Exercise is beneficial for cognition, because this study found that: 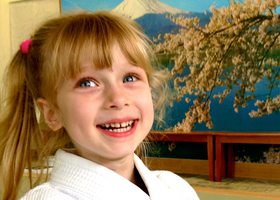 From stage fright to bullying, our martial arts students learn how to deal with conflict. A group of girls was bullying one of our students and her mom came to us. Two of our instructors sat down with her and gave her some strategies on dealing with the harassment. Physical protection is the last resort, but we taught her some techniques that might improve her chances of self-protection.

Children spend a whopping average of three to four hours in front of the television per day. That means that by the time they graduate high school, they have spent more time watching television than in the classroom.

Children that are in martial arts spend between 2-5 hours per week practicing in the dojo. That’s between 104-260 hours in a year doing something healthy.

If this sounds like something that could benefit your child, you have the opportunity to enroll in a martial arts class, Ann Arbor-based, and kid friendly! We have Judo and Karate classes for kids between the ages 6-12. Teenagers are welcome to join our adult classes in Judo, Nihon Jujutsu, and Iaido. For more information, visit https://japanesemartialartscenter.com/ or email info@japanesemartialartscenter.com.