Is Judo effective when it comes to self-defense?

But first you have to get good at it. Judo means "gentle way", not because it is an easy martial art, but because everyone can partake and benefit from training. Judo focuses on using efficiency and technique in overcoming an opponent, rather than brute strength. 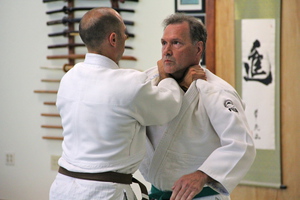 Is Nihon Jujutsu effective when it comes to self-defense?

But first you have to get good at it. Nihon Jujutsu is a system of self-defense techniques that uses modern and historical Japanese martial arts.

Nihon Jujutsu was forged from the most effective self-defense Japanese martial arts of its time: Judo, Karate, Aikido, and Taihojutsu (Japanese police immobilization and arresting techniques). "The founder of Nihon Jujutsu, Sato Shizuya, established this system based on his extensive studies with leading Japanese budoka (traditional martial artists), many of whom introduced ancient bujutsu methods into modern budo" (Source).

In a confrontational situation, what is the best outcome?

The best outcome for any confrontation is to avoid the situation. In The Art of War, Sun Tzu says, "The supreme art of war is to subdue the enemy without fighting."

What does this mean in the broader discussion on sexual violence?

The Centers for Disease Control and Prevention (CDC) emphasize implementing programs that proactively prevent violence. In one paper, the researchers found that rape is more common in cultures that promote male sexual entitlement and support an ideology of male superiority (Dahlberg and Krug 2002). Martial arts promote respectful and inclusive environments where gender is never a deterrent from promotions or leadership.

Martial arts isn't the ultimate solution against a cultural problem. However, it is one step in the right direction. Further, there are many benefits of training other than direct self-defense that can help navigate the dangers of the world, such as calmness, strength, judgment, and poise.

What happens if an attack cannot be avoided?

According to a recent Canadian survey, a 12-hour "resistance" program lowered the incident of reported rape among women over 30%. A lead researcher, Charlene Senn, says, "There are no quick fixes. We need multiple strategies. But we know that giving… the right skills… does decrease their experience with sexual violence. This is our best short-term strategy while we wait for cultural change."


Does learning these skills mean that I am to blame if I am attacked and cannot defend myself?

No. The only person to blame is the attacker.

Learning self-defense increases the probability of being able to stop an attack. It doesn't completely mitigate that risk, especially since attacks often involve complicated, psychological factors.

Who needs to learn self-defense?

Unfortunately, some groups of people are more likely to be exposed to attacks. According to the Bureau of Justice Statistics;
⁃
⁃    15% of sexual assault and rape victims are under age 12.
⁃    1 out of every 6 American women has been a victim of attempted or complete rape.
⁃    1 out of 33 American men have experienced attempted or complete rape in their lifetime.
⁃    Female college students are 1.2 times more likely to experience rape or sexual assault than college-age non-student females.

For more information on martial arts and self-defense, Ann Arbor Japanese Martial Arts Center can be contacted at info@japanesemartialartscenter.com.