What is a Tenugui? 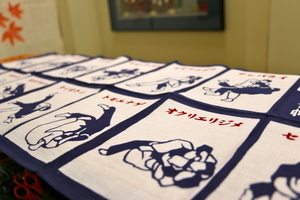 What is a Tenugui?

A tenugui is a piece of dyed cotton cloth.

The History of the Tenugui

The tenugui was first used as an accessory for Shinto rituals during the Heian period (AD 794 – 1192).  It became popular during the Kamakura period (1192 – 1333). As cotton became more abundant, the tenugui became a staple in Japanese attire. It was commonly worn during the Edo period (1592 – 1868).  After the Meiji era (1868 – 1912), a dyeing technique called “Chusen” was engineered and used to create more an abundance of tenugui.

The tenugui is the perfect balance of function and artistry. During the Edo period, people created the tenugui-awase, or dyeing contest. People from around Japan displayed their beautiful and unique designs.

The tenugui that was given to the Japanese Martial Arts Center has 14 depictions of Judo. It is a Kamawanu hand-printed Chusen Tenugui. 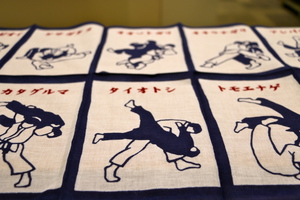 How to Use a Tenugui

There are any uses to the tenugui.

The tenugui is its entirety!