Here’s something you can brag about!

If you participate in any of our Ann Arbor martial arts programs, you have a very close connection to the founder of Judo, Jigoro Kano.

This infographic breaks it down: 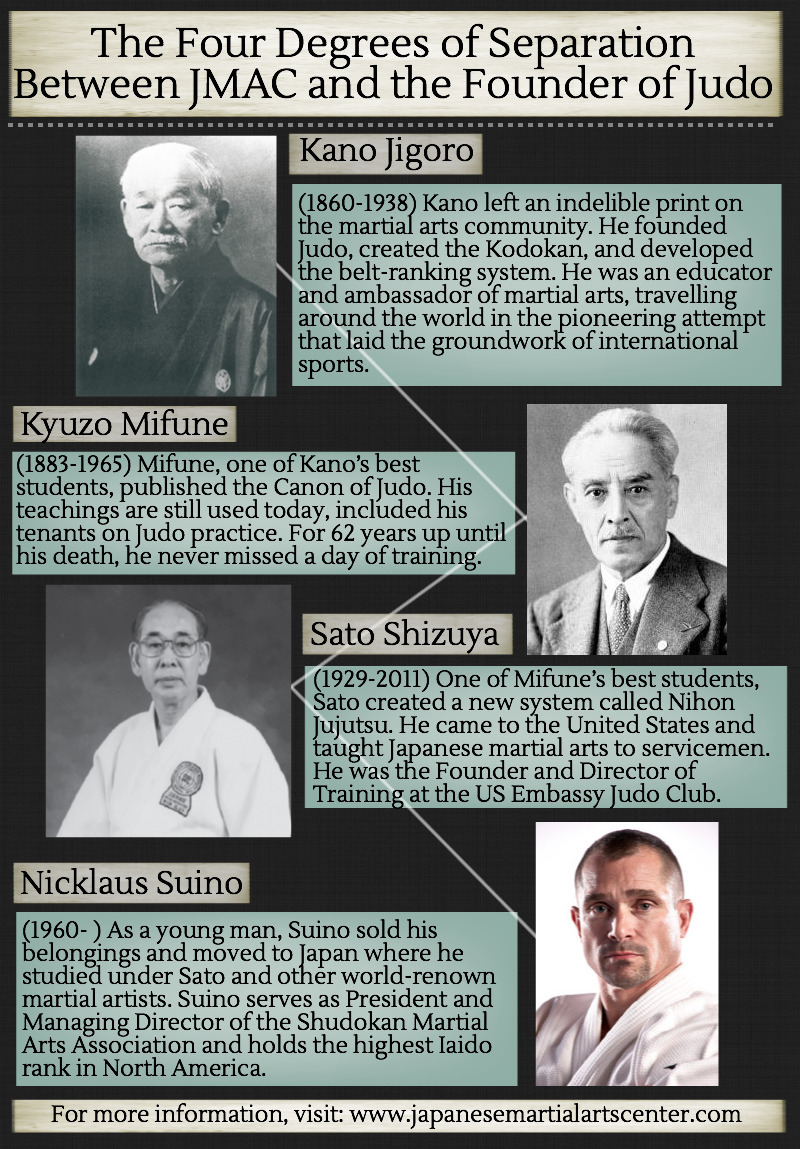 (1860-1938) Kano was an unlikely hero. When he was a boy, he was frail and often bullied. In his quest to defend himself, he approached many Jujutsu practitioners for advice, but was laughed at and denied instruction. The rejections only fueled his desire to train more, and he tracked down a teacher named Hachinosuke Fukuda Sensei.

After the death of his teacher, Kano started training with Mataemon Iso Sensei. Where Fukuda had taught a free-style version of Jujutsu, Mataemon focused more on formalized exercises. When Mataemon became ill, Kano began to study under Iikubo Tsunetoshi Sensei.

It was under Iikubo that Kano discovered the nexus of Judo: kuzushi. During one particularly rough sparring session, Iikubo had not been able to throw his student, whereas Kano had thrown his teacher three times.

When Iikubo asked Kano about it, Kano told him the basis of kuzushi: “It came to me that when you push or pull your opponent… you force his body to lean in one direction or another and to fall into an unstable position. You then use his lack of balance to apply your technique.”

From that principle, Kano went on to create Judo. He named his training hall the “Kodokan”, which roughly translates to “a place to teach the path”. The belt-ranking system owes its heritage to Kano: he used white and black belts to separate novices and advanced students in his class. Later on, he pioneered a physical education system for Japan’s youth, and worked to further Japan’s standing internationally wen he became the first Japanese member of the International Olympic Committee.

During one of his trips abroad, he died. After his death, he was awarded 12th dan, a rank symbolized by the double width white belt that he often preferred to wear.

To this day, Judo is an Olympic sport and continues to be a popular martial art. From the mixed martial arts circuits to competitive kata demonstrations, Judo remains to be as versatile and exciting as its inception in 1882.

(1819-1892) One of Kano’s philosophy teachers was a legendary monk who is depicted in the following tale:

Tanzan and a fellow novice monk were on a pilgrimage to a training monastery. A storm came upon them, causing some of the roads to flood. A young girl was trapped on one side of a crossroad. Tanzan asked if she needed help.

Tanzan and a fellow novice monk were on a pilgrimage to a training monastery. The plum rain, or tsuyu, that washes through Japan during the earlier parts of the summer had transformed some roads into torrential floods. At one of the crossroads, the pair came across a young girl. She was trapped.

She asked Tanzan for help, so he carried her across the stream.

The two men continued their journey. The other monk was very quiet. “What bothers you, Ekido?” Tanzan asked his companion.

“You shouldn’t have carried that girl! You know that we are forbidden from touching women!”

Tanzan shook his head. “Are you still carrying that girl?” he asked. “I set her down long ago.”

(1828-1879) The grandfather of Keiko Fukuda, Hachinosuke was also one of Mataemon Iso’s best students.

Mataemon had created a new style of jujutsu that focused on striking and grappling. He was famous for knowing 124 styles of punching, and using his newly developed techniques on the street to protect citizens from rogues.

(1883-1965) Mifune, one of Kano’s best students, published the Canon of Judo. His teachings are still used today, included his tenants on Judo practice. For 62 years up until his death, he never missed a day of training.

In one humorous tale, he visited a karate dojo to view a demonstration. The instructor destroyed a stack of tiles in a single blow. “Can a Judo man do this?” the instructor challenged.

He took a hammer from his bag and began smashing the tiles.

“You are going to use a hammer to break the tiles?” the karate instructor asked.

“Of course,” Mifune said. “In Judo, we say, ‘maximum efficiency with minimum effort’. What you have taken years to learn, we can do in seconds.”

Kano encouraged Fukuda to join the Kodokan, which was an unprecedented move at the time. It was very rare for women to train in the martial arts.  Her family only allowed her to go, because they thought she would find a husband at the dojo. She became a Judo practitioner instead, ultimately coming to the United States to teach other men and women.

(1929-2011) One of Mifune’s best students, Sato created a new system called Nihon Jujutsu. In his early 20s, he worked with other martial artists to rebuild Japan after WW2. Later, he came to the United States and taught Japanese martial arts to servicemen in the US Army, Air Force, and Navy. From 1957 until his death in 2011, he was the Founder and Director of Training at the US Embassy Judo Club.

(1960- ) As a young man, Suino sold his belongings and moved to Japan to train in budo, where he studied under Sato and other world-renown martial artists. He has published best-selling books on martial arts, including Budo Mind and Body. Suino serves as President and Managing Director of the Shudokan Martial Arts Association and a Michigan Regional Director for the US branch of the International Martial Arts Federation. Suino currently also serves as the head instructor at an Ann Arbor martial arts dojo, the Japanese Martial Arts Center.

In 1986, Gage moved to Japan to study Japanese martial arts exclusively. He joined the US Embassy Judo Club under Sato and the Aikido Yoshinkan Honbu Dojo under Shioda Gozo Sensei. He currently serves as the Director of the International Martial Arts Federation and Director of the Embassy judo Club in Tokyo, Japan, among other distinctions.