The purpose of etiquette in martial arts is to ensure the safety of those training and enhance the quality of training.

Standing (Shizentai)
The heels are together, the back is straight, and the hands rest naturally at the sides of the body.

To bow, bend at the waist.

Looking up is a sign of distrust. Bending too far forward is dangerous and off balancing.

Sitting (Seiza)
In order to move from standing to a formal seated position, the left leg kneels before the right leg. The toes are kept under the feet until the practitioner is completely seated. In practice, the feet are primed to move quickly from a seated or kneeling position to a standing position.

The palms are flattened and rest in the middle of the thighs.

In order to move into a bow, the palms form a triangle and placed in front of the practitioner. Both hands move to the ground at the same time, unless the martial artist is a swordsman. To bow, the practitioner bends at the waist.

The head should not touch the ground and the posterior should not lift from the heels, because historically this meant risking decapitation. Lifting the head is also unadvisable, because it signals distrust and disrespect.

This takes place at the beginning and end of class. Martial artists stand in line, from highest to lowest belt rank. The highest ranking sempai gives the following commands: 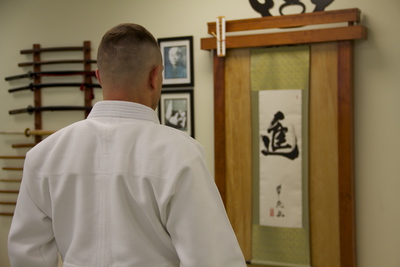 
Behavior on the Mat

When the Sensei is Teaching
Unless instructed otherwise, it is expected that the students are in seiza. This isn't just to show respect, but is practical in letting other people see the instructor. When the sensei gives a command,  the proper response from the students is "Hai!"

Working with a Partner
Before working with a new partner, it is important to bow. In principle, it acknowledges that there is reciprocal trust, especially when the moves are more risky. Safety of oneself and ones partner comes above all else!

Coming Late to Class
If a student is late, she should bow onto the mat, sit in seiza at the edge of the mat, and bow again to the shomen. When the sensei has the opportunity, he acknowledges the student. She bows to the sensei and joins the other students.

General
The uniform should be clean and odorless. Make up should not be worn, as it can stain the uniform. Jewelry is not safe to wear while doing martial arts. Nails should be trimmed. Good general hygiene is encouraged. Shoes are taken off at the door to protect the mat from contaminants.

Counting
When warming up, the sensei usually gives the first four counts in Japanese. The students give the next four counts at the same tempo and volume. The counts are martial, meaning that the numbers are abbreviated. The warm-ups set the tone for class. Each warm-up exercise was developed for the martial art. For example, the ebi in Judo is a structural move in groundwork.