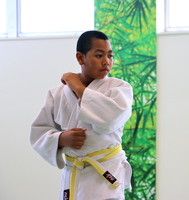 
Karate
空手 means "empty hand". It was invented in Okinawa, formerly the Ryukyu Islands, under the influence of Chinese martial arts. It was brought to the Japanese mainland with the intent of creating a systematic combat style. Karate focuses on strikes, such as punching and kicking.

Kihon
基本 means "fundamentals". These basic moves serve as a foundation for the martial art. Examples include stances, blocks, strikes, kicks, and meditation. Mastering the basics indicates a readiness to participate in complex kata and sparring. This is similar to working on scales and rhythm patterns in music before playing in a symphony.

Kata
型 means "form". A kata is a series of movements that demonstrate transitions, postures, and forms. Fighting and defensive scenarios guide the series in a kata. The practitioner moves as if he were fighting real opponents. The more nuanced and dangerous techniques are manifest as the student progresses.
Types of Kata:
⁃    Taikyoku: This translates to "first cause". This is one of the most basic types of kata. It sets the students up to learn more complex types of kata, such as the Pinan series. The practitioner is trained to deal with opponents on all four cardinal points. The karateka is predominantly in a front stance.
⁃    Naihanchi: This translates to "internal divided conflict". The steps are linear, but the practitioner is able to defend from any angle. The karateka is predominantly in a horse stance.
⁃    Pinan: This translates to "peaceful and calm". The practitioner moves in a way that deals with opponents on all four cardinal points. The stances are more varied than taikyoku and naihanchi series. 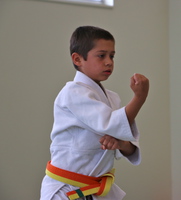 Going through a kata

Kumite
組 手 means "grappling hands", or vernacularly "sparring". Kumite involves two or more students. Students use kumite to work on timing and strength against an opponent.
The Four Types of Kumite:
⁃    Ippon kumite: This is a one step drill. For example, the tori steps in for a high punch and her uke would respond with a timely high block.
⁃    Sanbon kumite: This is a three step drill. An example would be the high, middle, and low punch series, and the corresponding blocks.
⁃    Kiso kumite: This is sparring that is taken from kata. This type of kumite is usually demonstrated in competitions with one tori against two opponents.
⁃    Jiyu kumite: This is free sparring. This is also in competitions, where practitioners can earn points for varying places of contact.

Bunkai
分 解 means "analysis" or "disassembly". Bunkai demonstrates the purpose and effectiveness of a kata. The instructor focuses on a certain part of the kata and shows an application. The more difficult the kata, the more nuanced the applications. For example, a block against a punch is more intuitive than stomping on an opponent's foot with the intention of crushing his instep.