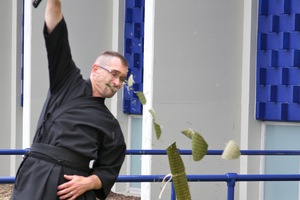 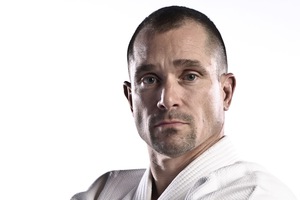 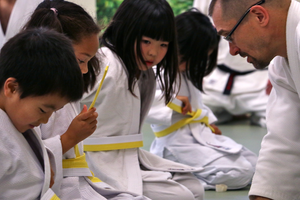 Suino Sensei didn't start out as a promising martial artist. He was a small child, often sick, and often talked his way into trouble. He grew up in a turbulent neighborhood, and fought his way home from school on many occasions. His parents, fearing for his safety and feeling that he could use more personal discipline, enrolled him at the Ann Arbor YMCA in 1968. It was a decision that would shape the rest of young Nicklaus' life.

He fell in love with judo instantly, and never looked back. After early success in judo tournaments, Suino vowed that he would always pursue martial arts. Beginning in 1979, he took up karate and aikido at the Asian Martial Arts Studio in Ann Arbor. He excelled and became a member of the AMAS Instructors Training Program.

In 1988, Suino-Sensei decided to see the homeland of Bushido. He sold his belongings, bought a plane ticket, and moved to Yokohama, Japan. Between 1988 and 1992, he practiced judo, jujutsu (jujitsu), iaido (swordsmanship), and kyudo (archery).  He studied iaido at the home dojo of the late Yamaguchi-Katsuo, one of the greatest of the WWII generation swordsmen. In 1989, he was appointed secretary to the Foreign Department of the International Martial Arts Federation, Tokyo HQ. He was four-time All-Tokyo forms champion in iaido at his rank level between 1989 and 1992, and represented the Kanto region in the All-Japan tournament in Kyoto in 1992.  He continues to visit Japan regularly, visiting and training with some of the world's most respected instructors of aikido, iaido, judo, jujitsu, karate, and koryu bujutsu.

THE PATH TO MASTERY

Suino Sensei has been called "one of North America's foremost martial arts teachers." His personal mission is to master the most profound aspects of Japanese heritage martial arts and offer the true Japanese budo experience to his students. He believes that proper practice of Japanese martial arts can have a profound positive effect on people's lives. Since 2009, he has been consulting for businesses and individuals who want to improve their effectiveness using  the physical, mental, and intangible principles of mastery.

Article on Nicklaus Suino from the Ann Arbor Observer

Part I of an Interview with Suino Sensei at Ikigai

Part II of an Interview with Suino Sensei at Ikigai

or email us today to set up your appointment!