I AM JMAC: Melissa 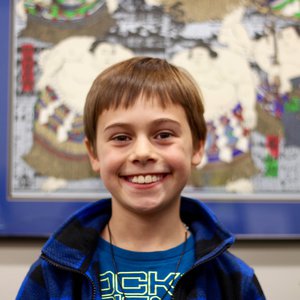 Melissa is a high energy 10-year old who’s been training in both karate and judo for the past four years. In that time, she’s earned her orange belt in Karate and green belt in Judo.

In addition to training at JMAC, “I play soccer and like to ride my bike,” she says. This talented pre-teen also participates in community theater, having recently starred in a musical where she played a raccoon! As an avid reader, Melissa especially enjoys mystery and adventure books – the Wings of Fire series being her most favorite.

“I used to watch my older brother train and wanted to do judo and karate.” Melissa’s mother Tina adds “Melissa’s brother started at JMAC in 2011.” After researching three other places, “we liked the self-defense aspect of training, the location, and scheduling. Shortly after our son started, my husband resumed his training at JMAC.”

“I would tell them to try it – the Senseis (teachers) are funny, it’s good exercise and you learn life skills.”

How would you describe training at JMAC?

“Karate is fun!” “We learn, but teachers also make corny puns,” she says, “I like the bad puns from the Senseis, they’re funny. Judo is neat because you get to lift and throw people! I also like learning to grapple. It’s all really good exercise.” And just like most siblings, “I don’t like being with my brother in class – he’s super competitive,” she laughs, “I like to do the punching drills with him, but other than that they keep us apart.”

What was your favorite activity when you began taking karate?

She excitedly responds, “a flying roll onto the mat and duck and jump with noodles – I like that one!”

What part of training do you find easier to do?

“In judo and karate, the forward rolls.”

You are in the advanced class and do sparring with protective gear, drills, and kata. What’s your favorite activity in class now?

“I like the sparring (application of skills), especially with my brother,” she says laughing. “I don’t like wearing all the protective gear but it keeps me safe.” She adds, “originally I didn’t like sparring, I was afraid of getting hit and maybe getting a black eye.”

What part of training do you find harder to do?

“It’s hard for me to slide and punch without bouncing around. You’re supposed to slide your feet, but I tend to bounce!”

“When I started judo, I couldn’t pick anyone up to throw them in Seoi Nage, and now I can.” She continues, “I’m a little person. I could see that my brother could do it and I wanted to do it too – there’s definitely some sibling rivalry! Now I can throw people who are larger than me.”

How has your training at JMAC carried over into your everyday life?

“I have more respect,” she smiles, “I learned how to be quiet at school and listen better to my teachers. The other thing would be that when I started, I was very shy and apprehensive to push anyone in soccer, so it’s taught me to be more outgoing.”

Her mother Tina adds, “Melissa is much more outgoing, she’s overcome some of her shyness with adults. The training has helped with her balance and improved her coordination which has helped her in soccer. She’s making lots of friends at the dojo and has learned skills, such as, how to properly shake hands and to look in the eyes of the person whose hand you are shaking.” 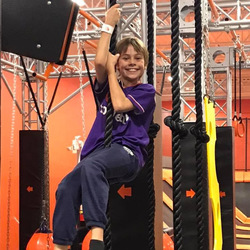