I AM JMAC: Matthew

Matthew’s been training at JMAC for 7 years, but he’s been a part of the JMAC community ever since his parents, who train at JMAC, brought him to the dojo at the age of 2. This amazing 14-year-old trains in both karate (purple belt) and judo (blue belt). He’s at a transitional time in his training, where he participates in the kid’s programs as a senior student while gradually transitioning to the adult programs.

What does an accomplished young martial artist do outside of school and training?

“I like to play video games a lot, especially JRPGs,” he says, and “I like to sit and relax and read in my room.” Although he reads all kinds of stuff, his favorite is fantasy.

His next great adventure is high school, which he begins this year. He’s very excited for the advanced program that he’ll be participating. As for favorite subject, he states, “content-wise, it’s math.  I like to learn about all the different things you can do with it. Other than that, my teachers affect how much I like a subject.”

“I was here a lot because my parents did martial arts. I thought it was really cool and wanted to be a ninja” he laughs. “So, when the kids karate program opened up, I said ‘yeah’, I wanna do that!’”

“Karate is fun to do and learn, but you can’t mess around all the time” he says, smiling. “We work on stuff, but also have fun. There’s a lot of time where you have to be serious about what you’re learning. JMAC’s also a nice place to be and hang out with people.”

What words would you use to describe your training at JMAC?

Almost immediately, he states “It’s pretty flexible, because if you’re having trouble you can ask a teacher or you can ask another student who knows the material better. It’s also a community because you can just talk to people, really. The only real divide between people is if you’re one of the oldest students and there is someone new that comes in. You don’t have a lot of time to hang out with them, but it’s really nice once you get to know them after class.”

What’s your greatest challenge in the martial arts?

“In judo” he says, “we do randori, which is applying principles that we learned.” He continues, “It’s kind of hard not to be tense all the time. You try to be unpredictable so you can get people off balance, but I have to work on practicing more types of throws. Right now, I have two or three that I usually do, so they know what to expect.” He adds, “I mean, how do you think about being relaxed? Because, when you think about being relaxed, you try to be relaxed and you get tense,” he smiles and adds, “it’s really weird.”

You recently began training in the adult karate program.  What’s the greatest difference that you notice between the programs?

“I notice the teaching style is different. In the kid’s program, there is more group work and occasionally the more senior students will branch off and do one kata above than the rest of class. The adult program is like that, but everyone can be from the most recent kata to 3 or 4 kata behind that. There’s more individual work and one-on-one, with kata.”

“When I started karate, we did a lot more of the basic kata. It’s the kata are that you’d learn as a child in Japan as a part of your PE program. You’d have basic movement patterns, left, right, middle (‘I’ pattern). My biggest problem back them, was that you’d have to do this spin turn as a part of that. You’d have to put one foot behind your other foot and then turn your body at the same time. That was always really hard me when I was just starting.”

“More recently, I learned a kata that involved some different stepping and movements that I was not familiar with. It was a kata that did not follow the “I” pattern, I was so used to. The new kata was - so not that. It had different stepping and more complicated moves. It wasn’t just basic upper block, lower block. All of a sudden there was this weird block, push thing,” he says “moving his arms and hands. Out of nowhere you have this fancy, ribbon looking thing with turns – ‘step, turn, 45 degrees, put your hands in chamber, push out, etc’. The hand position is still weird for me, not too close, not too far – I’m still working on that. Now that I’ve been doing it for a while, I’m feeling better about it, but it’s challenging.”

How has your training carried over into your everyday life?

He laughs, “Well I can roll and it looks cool!” But other than that, “I think that it helps me to think things through before I do them. I rush into things less and take my time and think about what I’m going to do and what I’m going to say. In karate kata, when you do a turn you look first, so you know what you’re dealing with. You don’t want to just punch right into a wall. And if there is something in the way, you can then adjust and then continue.” He adds “Two of my closest friends I would not know if I hadn’t done judo. I think it’s really nice to have that type of community here so that you can have those friendships.”

Why Karate and Judo and why JMAC

“His dad began training with Suino Sensei when he was 17 years old. Then I started. We brought Matthew to the dojo when he was 2. As soon as the kid’s program was available he started training – there was no question.”

What positive changes have you noticed in Matthew as a result of his training? Other comments?

“I find that he’s calmer and he thinks things through. I’m sure part of that is him and part of that the training. It’s always interesting to see him helping the younger kids – whether they’re age younger or belt younger he really seems to step up whenever needed. He’s definitely more confident - I think that comes from here.”

“He has a quiet nature and this helps him be more outgoing - And, speak his mind. He’s found his voice. At the beginning of class, there’s a call to meditate, ‘Mokusou’, a moment to get your head in the game. It’s incredible to hear his loud, strong voice.” She smiles and continues, “One of my favorite memories is of him in a Mokusou contest a couple years ago, at the JMAC anniversary celebration. He was very young and the entire community was cheering him on as he belted out the Mokusou in his young, high pitched voice – red faced, he eked out every last bit of air in his lungs.”

“It’s nice for us and it’s nice that he’s met his best friends here. And, he’s met all kinds of kids. He’s starting high school this year, which will be really challenging, and I believe this has helped him prepare for the unexpected things that life brings.” 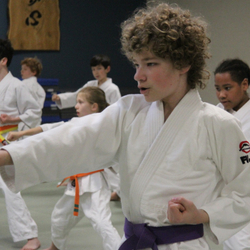 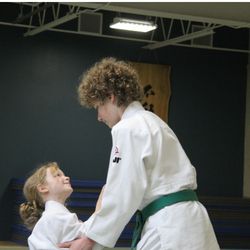 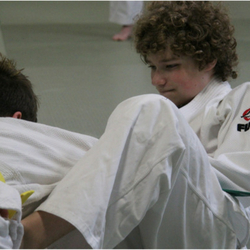