I AM JMAC: Haruka 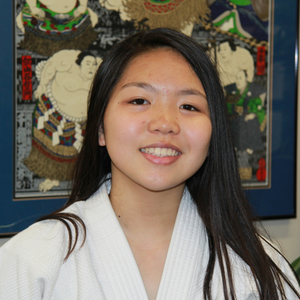 Haruka began training in karate 5 years ago, when she was in second grade. She has earned the rank of green belt in the JMAC kid’s karate program.  While she doesn’t participate in other martials art styles right now she thinks that “judo’s pretty cool because it’s not just punching, it uses the entire body.”

This amazing young lady has other interests too! She plays two instruments, the viola in her school’s orchestra and has been playing the piano for 6 years.  Although she loves to write stories, her favorite subject in school toggles between English and math, “it depends on the teacher, they really influence how I feel about it.”

“I told my dad that I wanted to do karate.  It was the most popular martial art you’d hear about and once I stared doing it, found it to be something I liked.”

“We found several places online and JMAC was the first place we visited. We watched a class and I liked the energy in the room.  It was and continues to be really positive! I remember telling my dad, “Let’s do this one!”

“I would describe what the training is like so they know how much of their time would be consumed by it and how much effort they would have to put into it. I would recommend this place!”

What words would you use to describe your training at JMAC?

You are in the advanced class and do sparring with protective gear, drills, and kata.

“It would definitely be between kata and sparring.  In kata, it’s not just a bunch of random moves, you have to think about why you’re doing what you’re doing and it furthers your understanding of what you’re learning in class. In sparring, you get to use what you have learned in class and test it out and see how it works for you.”

Think back to when you began taking karate.  What was your favorite activity then?

“I think it was kata, because I was kind of afraid of the other people because they had been there longer than me and knew a lot more of what they were doing.  Kata is you watching the teacher, then doing it yourself. It was a way to do it myself without having to confront someone else.

What part of training do you find easier to do? Why?

“The drills, because they are repetitive, are easy for me to do. I think when something new is introduced, it captures my attention more because I want to learn more about it.  They also help younger students lock down their basic moves.”

What part of training do you find harder to do? Why?

She smiles, “Actually, it was roundhouse kicks. That was when I was in third grade. I just couldn’t do it, it was really difficult for me and my mom saw that.  When we went home, she helped me work on them with a pool noodle.” We’d practice for about an hour to help me learn to turn right.  Now it’s just like something basic.”

How has your training carried over into your everyday life?

“In school, it has helped me put a lot more focus and effort into one thing and to not procrastinate.  Although, I still procrastinate,” she adds.

“And, this is a basic thing”, she says, “when it gets cold and icy outside and I fall, with the practice of falling in class, I just fall easier and don’t hurt myself.”

“I think that even though it’s self-defense, it’s not just preparing for if someone attacks you, but more so about how you would mentally prepare yourself to work hard.”

Why karate and why JMAC?

Haruka chose to train in karate. Suino Sensei asked her why she wanted to learn karate, and she answered “self-discipline.”

“We visited JMAC first and immediately felt that this was the place. I like that she is learning the Japanese culture here, as I’m Japanese and she’s American, so she doesn’t know the Japanese culture. I feel that this dojo has a very authentic Japanese atmosphere. The procedures are exactly what Japanese people do, even more traditional than actual modern Japanese dojos. It’s kind of a purified essence here. I don’t stay during class to watch, as the dojo is, in a sense, a spiritual place and because she doesn’t want me to come ,” he adds, chuckling.  “Those are the things I found later, but perhaps felt them the first time we were here. This is a great place!”

Is the kid’s karate program what you expected?

“I had no expectations as I wasn’t sure what to expect. I’m a teacher, a lecturer at the university, so I understand how to teach.  I have found that the way that they teach is very good and I’m very impressed with the instructors.

There have been some occasions where she was invited to events at other martial arts schools and I found JMAC to be more organized and clean. It seems too, that the focus at JMAC is to teach kids martial arts in a manner that is fun for them. This is not always the case at other schools. It’s important that the kids are learning martial arts and not just playing.

What positive changes have you noticed in Haruka as a result of her training in karate?

“She has a very positive attitude and willingness to help others.  I can clearly see how this has a positive influence on her interactions with other friends. The instructors are always giving them encouragement.  Training has also helped with her self-motivation. For example, she started exercising on her own. It’s helpful to her studies, because she needs self-discipline. Overall, this has helped her be self-disciplined and independent.”

“We were very fortunate to find this place. It’s great to see that the dojo is growing. I appreciate Suino Sensei’s and all the Sensei’s efforts to make this happen.” 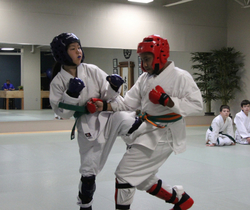 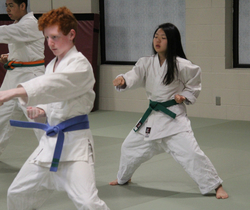