I Am JMAC: John Gage Sensei 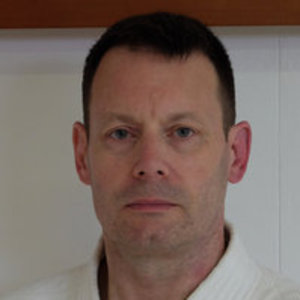 For some people, martial arts training is a hobby. It’s a pursuit that they chip away at. For other people, it’s a lifetime passion engrained in their character and way of life. Our I Am JMAC subject this month may not have been born into martial arts training, but it’s become an inseparable part of his life. We’d like to introduce you to Japanese Martial Arts Center Senior Instructor John Gage Sensei, who describes martial arts training and the study of budo as something that “can become a catalyst to discovering greater joy and fulfillment in all aspects of life.”

When did you begin training in martial arts?

“I was interested in Japanese history and culture from a young age, and began studying aikido at the University of Michigan Aikido Club under the direction of Kushida Takashi, at age 17.” Like many who train in martial arts, Gage Sensei found that training was the perfect accompaniment to other physical activities. When he was 14, Gage Sensei took up running and realized how mentally clean he felt after a long run. His biggest “Ah-ha!” moment in martial arts moment was realizing that training could give him the same feeling. “I guess my earliest “ah-ha” martial arts moment followed the discovery that one can enter a similar state of clarity, complete with a melting away of one’s concerns, as well as feeling of renewal – both physical and mental, during rigorous martial arts practice.”

What are some of the challenges of martial arts training?

For some folks deciding to take the plunge, to take those first two introductory lessons, can be a big moment. Whether it’s fear of going after your dreams or a physical limitation, we always face challenges. Those don’t go away when you walk in the dojo, but training offers you the opportunity to work through them or, as Gage Sensei says, “challenges arise incrementally.”

“I believe it is not the character of the obstacle that matters, rather it is one’s response – that of working continuously to honestly evaluate and understand each challenge as it arises, and using the resultant physical, mental and emotional insight gained through this process to implement suitable solutions at each and every step.” He attributes this process of evaluation and perseverance, as one of the most significant and admirable aspects of long-term budo practice.

What was it like when you first started training in Japan?

“Long, long ago, I departed for Japan with a small suitcase, minimal language ability, and a letter of introduction to a well-known judo teacher whom I had never met. Fortunately, Sato Sensei accepted me as his student and introduced me to numerous renowned martial arts teachers. My early experience in Japan was typical of student life on a limited budget anywhere; I went to classes, worked part-time jobs, explored Tokyo, and discovered new and wonderful things. Was it easy? No, but I was intensely happy to be in Japan living the dream!”

You were an assistant to Sato Shizuya Sensei and traveled with him to various seminars all over the world. Do you have a stand out memory or favorite event you attended?

“First, I need to sketch who he was. Sato Sensei was a traditional, very strict and infinitely kind man who dedicated his life to the tenants of traditional Japanese martial arts, or budo. He was the son of a senior judo instructor of the Tokyo metropolitan police department and received significant life-long direction from various prominent members of the Judo community such as

Mifune Kyuzo, Nagaoka Hidekazu, Kotani Sumiyuki, Ito Kazuo, Tomiki Kenji, and others.” Gage Sensei says that he has many wonderful memories of training with Sato Sensei, but there is a specific event that gives him the happiest memories.

“While I have many wonderful memories of my time with Sato Sensei, perhaps the five days he and I spent together in Romania is one of my fondest. It was only a few years after the country had overthrown the Ceaușescu government (1989) and conditions throughout the country were very dire. Sensei led a number of seminars during our first days in Bucharest, and thereafter we toured the countryside in a state-sponsored car with driver. We saw Vlad the Impaler’s castle, stayed at quaint communist-era inns, and discovered a lovely country in the midst of renewal.”

What is your favorite training memory?

With a lifetime of stories and experiences to draw from, one particular exhibition event stands out most for Gage Sensei. “1989 Kokusai Budoin, IMAF Extraordinary Exhibition at Yoshinkan Honbu (main Dojo), Tokyo, Japan: Saturday afternoon, the four hundred tatami mat Yoshinkan Honbu was festooned with white bunting, while numerous dignitaries from the Japanese government, distinguished guests from various traditional arts, and senior martial arts legends such as Yamaguchi Gogen (the cat), Shioda Gozo, and others were seated as the event began.

“The astounding Yoshinkan Aikido exhibition team, led by Shioda Gozo Kanchô, demonstrated first. Maestro Kanazawa Hirokazu and his amazing SKIF team followed. When the Naginata, Jôdô and Kobudô demonstrations were complete, it was time for Sato Shizuya Sensei to demonstrate Nihon Jujutsu - J. Gage as uke. Otsuka Hironori Sôke (headmaster) of Wado-ryu karate-do was scheduled to follow, but, as his assistant had failed to arrive, J. Gage was his uke.”

“The final exhibition of the day was to be Iaidô (the art of drawing and cutting with a sword), as demonstrated by the peerless Yamaguchi Katsuo. Standing at the edge of the mat, I clearly recall Yamaguchi Sensei stepping forward with his sword, bowing to the head table, audience, and collected teachers. Then his dignified and graceful seated bow, and how, upon standing he placed the sword in his sash. Meanwhile, I was thinking, how am I to survive this?! Whereupon, Yamaguchi Sensei recognizing my confusion, beckoned me to retire and be seated. His demonstration was magnificent, and I survived to tell this story.”

You’ve been training for a long time now, what advice or encouragement do you have for someone interested in martial arts training?

“First, visit the Japanese Martial Arts Center (JMAC), as it is truly a premier organization. Second, understand that the study or practice of budo is a means of personal growth that comprises development and refinement of both the physique and one’s mental/emotional state, that encourages social skills such as compassion and regard for members of one’s community, and can become a catalyst to discovering greater joy and fulfilment in all aspects of life.” 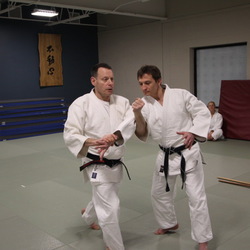 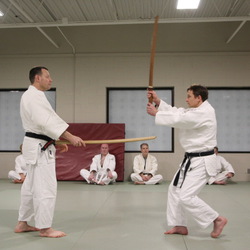