I AM JMAC: Dan Holland Sensei 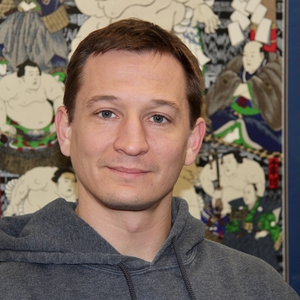 JMAC instructor Daniel Holland Sensei has quite literally been training in martial arts nearly his entire life. From taking Taekwondo classes at Lansing Community Center as a child to competing in wrestling in high school to his time running the Institute of Traditional Asian Martial Arts in East Lansing and now being an instructor at JMAC, Dan has devoted a lifetime’s worth of effort to learning a variety of martial arts techniques and principals.

What are your hobbies and interests outside of Japanese Martial Arts Center?

“One thing I really enjoy is programming. I'm a Web Developer for my day job, and outside the dojo, I'm on a computer a lot, even when I'm not working. The martial arts are for optimizing the body and mind; programming is for optimizing redundancy. One of my main hobbies is tuning my coding/writing/researching workflow into an ideal environment for discovery and creation. Consequently, my laptop is so customized no one else can use it. For me, programming does not come nearly as naturally as the martial arts, but it does captivate my attention, and without a doubt, it has cultivated the way I think and train.”

When the weather is right, Dan also enjoys a particularly physically intense activity:

“I also love climbing trees. Climbing and grappling are a kindred skill. If you happen to be at the Arb on a nice afternoon on my day off and look up, you might spot me in the foliage!”

When did you start your martial arts training?

“When I was 7 years old, I joined a small Taekwondo class in a local community center in Lansing, and I've been involved in the martial arts ever since.”

In high school Dan competed heavily in wrestling, with over a couple hundred matches!

“Wrestling was great, because it threw me into the chaotic realm of physical competition, got me used to tough work and rough hands, and paved the way for better things.”

“About the same time I started wrestling, I lost interest in that Taekwondo dojang and found another martial arts school that taught an eclectic mix of Western and Eastern styles. I really gained a lot out of training there. In particular, the idea that certain styles complement each other, can smoothly adapt from one to another depending on circumstance, has stuck with me to this very day.

While he may have started Taekwondo training at a young age, Dan likes to feel that his training actually started much later after reading a flier for Traditional Japanese Swordsmanship at the Institute of Traditional Asian Martial Arts and met Nicklaus Suino Sensei!

“My real training, however, began when I was about 18 years old and found the Institute of Traditional Asian Martial Arts in East Lansing. It was a pretty small hole-in-the-wall dojo just north of MSU campus where I was attending college, and at the time it was run by Suino Sensei!”

“I walked in the doors, and I will tell you: At that age and time of my life, there was nothing more enticing than a place where I could swing a very large sword around without being told not to do so!”

Do you have a favorite martial art style you like to train in?

"Not really, though there are definitely times when I think, 'I can't wait to go swing my sword,' or 'Man am I in the mood for some good ol fashioned grappling!' But overall, no, I don't have a favorite.

All these arts have different shapes that at a glance appear dissimilar from the outside, but feel so similar from the inside. Ostensibly one would think that swinging a sword and swinging an arm are two different affairs, but I don't know. They have so much in common, and the similarities are fascinating.

Even if the shapes are disparate and infinite, the methods of creating those shapes are finite and integrated, and that's one of the characteristics of this stuff that enthralls me so deeply. When you step away from martial arts *styles* and study the martial arts, or step away from *techniques* and study technique, you begin to see they're all ingenious variations of a very similar thing."

When did you know you wanted to become an instructor at JMAC?

“I really didn't know I wanted to be an instructor until I became one! I love being an instructor, but I never actively sought out to become one. I first started teaching Traditional Japanese Martial Arts at ITAMA when Suino Sensei asked me to help out with Iaido on Saturdays, and that's what eventually led to me running the school.

Even then, I wasn't planning on running ITAMA. It was a pretty crazy situation where Suino Sensei had passed the school on to Jeff Friedlis, who was probably the most gifted martial artist I have ever met. But Friedlis Sensei passed away unexpectedly, and it came down to this: either I take over, or the school shuts down. So, I began instructing full time. I was pretty young, definitely wasn't qualified, but I cared very deeply so I was able to make it work. When Suino Sensei moved to Ann Arbor and opened JMAC, I knew I wanted to come to Ann Arbor so that I could have an instructor again. After I made the move, Suino Sensei asked me to assist with teaching duties here, and I was very honored to do so.”

What were some of the challenges of becoming an instructor?

“Oh, there are tons of challenges, but that's what makes it interesting!”

Dan says that one of the biggest challenges is training a group of students with different skill levels, ages, goals, and body types. The larger the classroom size, those challenges increase.

“I've been training for 30 years, and of all the people I've met in that time, I've come to realize this: the martial arts boil down to an extremely specific skillset, but the desire to master that skillset is different for every single person. No one trains for the same purpose. Even if a bunch of people start because they want to learn to defend themselves, what drives that desire is unique to the student.”

Martial Arts training can be a deeply personal experience. Everyone is motivated by different reasons as such the personal development track is different for every student – even the instructors!

“Here's the greatest challenge, above any other: I am ultimately a very private person. I prefer not to reveal much about myself, avoid social media, and I even found it a little difficult to share what I have in this interview. Such a temperament may come as a surprise to those I teach and train with at the dojo, as my persona on the mat tends to be large and loud and big -- though I suspect that people I work with at my day job would be just as surprised to see me booming around at JMAC, since off the mat I'm generally reticent and self-engaged.

Adopting a "Sensei Voice" and "Sensei Presence" has been a huge part of that challenge, and still can be even today. It's totally essential though, because private or not, if you don't openly and honestly engage with your students, you make it impossible for them to engage with you. False engagement builds barriers, and then crucial information gets lost in the interaction. So, I'd say developing and deepening that connection with my students, despite my natural tendency toward introversion, has been the greatest challenge, and it's always on my mind. I really care about my JMAC family, and want to give them the very best I can.”

What do you love most about being an instructor? Do you have a favorite training activity?

“First, I am constantly surprised at how uplifting the JMAC environment can be. Whether I'm feeling up or down before I step on the mat, I almost always walk off beaming. I mentioned before: in public settings outside the dojo, I'm usually quiet and contained, but that's not my natural way. I am inherently energetic and movement-oriented. In fact, my apartment is mostly empty so I have full reign to move around, practice solo drills and swing sticks. But you can't do things like that in most public settings -- like the workplace, coffee shops, restaurants, etc. -- so I rein it all in. But at the dojo, I have a safe area to investigate my interests along with other people similarly inclined, and that is such a special thing.

From the other direction, it's really amazing to watch our students progress and grow. It's so cool to see what people can accomplish when they throw their heart into something, and it's a great feeling to know that I've played some small part of their journey. I love hearing success stories from inside and outside the dojo, and sharing the joy and excitement of those stories.”

When it comes down to his favorite training activity, Dan relishes the time he gets to train a student one-on-one in a personal lesson.

“Directing a group is something I can manage, but it's when I work one-on-one with another person that I can truly hone in. In most cases I head into group classes with a basic game plan, but since I'm working actual human beings, that plan almost always needs to change. Could be some of the training activities are too complicated for the allotted class time, could be what made perfect sense in my head just isn't clicking with anyone else -- all kinds of reasons.

But when I'm working one-on-one, it's a much straighter shot. I have all the freedom I need to focus on and communicate openly with that single student. I usually give about 4 - 6 hours of private lessons per week, and feel like that's where my best teaching moments occur.”

How has martial arts training carried over into your personal/professional life?

“The martial arts are so much a part of my life I have no idea who I would be without them, or how I'd even live. If I had to settle on some kind of identity, the martial arts would be at the core. They have totally and completely shaped my life.

To me, the martial arts are a systematized approach toward the resolution of conflict. When I say conflict, I don't just mean fighting or combat. Sure, those are in scope, but they represent the extreme edges of the concept. Conflict can be anything that gets in your way. So, for me, the martial arts are ways of negotiating boundaries, adapting to circumstance, and finding and maintaining freedom. Common, useful, real-life applications of that might include moving freely through a dense crowd of people, regaining your balance when you trip, standing so your skeleton supports your weight or watching traffic down the road to infer the best route to take.”

Are there any other martial arts styles you want to pursue?

“But back in days when I was running ITAMA, I invited an Internal Chinese Martial Arts instructor named Doug Lawrence to teach at the dojo, and I started training pretty seriously under him. He taught a system that tied Tai Chi, BaGua and Xing Yi together in order to investigate the linking principles among them. It was incredibly enlightening, extremely interesting, and I do still practice that system on my own. I would love to do more though, especially be a part of his class... but there is only so much time, and he teaches in Lansing.”

While he may be an experienced martial artist, the journey doesn’t end when you achieve a particular rank. Dan is constantly learning and committed to improving his skills. A trip to Japan with Nicklaus Suino Sensei is on the horizon!

“It's the end of January 2019 now. Our trip to Japan is only a month away, and I can't wait to study Yahagi Sensei's swordsmanship, Satoh Sensei's aikido and Nobetsu Sensei's karate!” 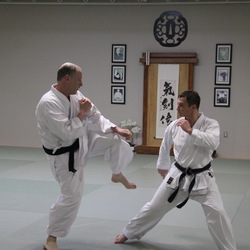 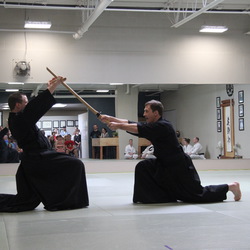