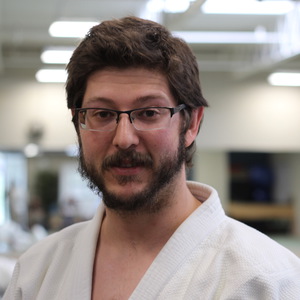 Andy, a lawyer by trade, does a little of everything including criminal, domestic, and business law.   His job is actually what brought him to JMAC.  “When I moved to Ann Arbor, my boss recommended coming here.”  That was back in 2011.  Three months after starting training in Nihon Jujutsu, Andy began Judo and Iaido. In 2016, he started Gojo Ryu karate. His current focus is on Nihon jujutsu, judo, and karate.  He has earned his black belt in Nihon Jujutsu and judo.  “If only I had more time,” he says, “I could train in all four arts!

Andy relaxes by spending time with his wife Lianna and three kids, Julian, McKenzie, and Adeline, ages 6, 4, and 2 respectively. When asked about other hobbies or interests he chuckles and says, “I’m a video game dabbler.  That’s also a part of how I relax.  I don’t do Facebook or other social media, I’ll decompress on the computer or tv for a half hour, that’s my thing.”

What first got you into martial arts?

“I always had an interest in martial arts and joined the University of Michigan Karate Club when I was an undergrad.  While attending law school at Michigan State, I became more involved and trained in Shorin Ryu Karate for 3 years, attaining the rank of brown belt. Then I graduated, got a job, and moved to Ann Arbor. My biggest martial art regret was not continuing and testing for my black belt.”

You’ve trained in several different arts. Is there a commonality?

“A commonality in all the arts is that the breathwork is so hard to do.  Until you have a solid mastery of technique it’s difficult to focus on breathing.  When you start moving around and doing randori, breathwork is out the window until it’s engrained. You have to be constantly aware of it.  It’s not easy.”

What are the benefits of breathwork? “It’s good for energy conservation.  I’ve noticed it in other arts like judo. People like Holland Sensei or Jackson Sensei who have a really good handle on their breathing and moving, waste so much less energy than us lesser mortals.” He breaks into a smile and continues, “It’s funny, while I’m gasping for breath they have slow easy breathing with their motions and a full energy reserve left.” He explains that “breathing is a huge way for them to relax, be more efficient with their movements, be more aware of what’s going on, maintain a better sense of control in self, and better presence in the moment.  This is why it’s so difficult to do, especially in that stressful situation. I’m thinking about where does my arm go?  Where am I going to get locked up or pinned next, and the breathing part isn’t engrained yet so I lose that very quickly.”

“A while back, Suino Sensei said you’ve got to be comfortable in those bad positions where someone takes your back or starts getting a choke in. If you to tighten up, you accelerate your breathing and you lose options. Whereas if you relax, and get control of the situation, you have a lot more options and you end up putting yourself in less compromising positions.”

Andy likens the importance of ongoing focus on his breathwork to the drills that are practiced at each class, “There’s a reason why we do certain drills all the time. For example, tai sabaki stepping drills can seem almost mind numbing. It’s like, ugh more stepping. But when applied to pressure situations it’s incredible how often that second foot can be left behind, making for sloppy footwork that translates to a technique that is not working.  There’s a reason why you drill and drill and drill those basics.” He comments “Gage Sensei and Satoh Sensei, their footwork is incredibly fast and it shows you that there is a method to the madness.”

Why did you choose JMAC?

"I did the intro classes, picked it up, and kept going. One of the things that is really cool here is the authentic budo experience. The mutual welfare and respect really shows here.  All the things that make a good place to train hold true here - Your willingness to help your partners, betterment of them, yourself, the dojo, and the level of the instruction is incredible. You can’t find better than the level of instruction that you get here."

What are your greatest challenges in martial arts?

“There’s a lot of them.  My biggest challenge is I get stuck in what comes natural, whether it’s right or wrong.  For example, if I’m doing a technique and my natural instinct is to move a certain way, I get stuck doing it that way and it’s very hard to break that tendency.  In judo grappling I lean forward to use my weight to pin someone, that’s my ingrained wiring, which here is very bad, because they use their legs and sweep your knees out and turn you and your going down,” he laughs, “and I know it, I know it’s coming. I know it’s what they want to do, but that wiring has me lean in.  It’s so very, very hard to break that.”

What are you doing to overcome that natural tendency?

“Once a class, I take a break from randori and work piece by piece on something to do to cut down on the bad habits. It’s improving – little bit by little bit.”  He explains, “It’s making sure that my fundamental reaction is right. Focusing on one piece at a time, there’s a lot of benefit to that.” I remember in Iaido, demonstrating a form and Suino Sensei picks one thing to improve, while you know there’s at least 20 different things to improve. You realize that what Sensei is focusing on is, ‘Let’s work on it this one piece, make it better and try it again focusing on that one piece.’ If you focus on too much at once it’s over load and you won’t get anything out of it.”

What unexpected benefits have you experienced as a result of your training?

“Physically, my balance has gotten better, crazy better, from all the arts.  It’s also a great way to get in shape and stay in shape.”  He becomes thoughtful, “A pretty big unexpected benefit that I’m trying to incorporate is the forced calm you have to maintain on the mat. I’m translating that to being calm and deliberate in my work. I notice it most when I’m doing something legally related - I start talking fast.  I know what I want to say in my head, but it doesn’t always come out that way.  What I’ve been focusing on is staying slow and deliberate piece by piece. As I’m trying to be more cognizant of it, it’s becoming more noticeable, which is a cool benefit.” 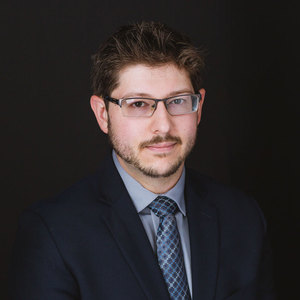 How has your training carried over into your professional or personal life?

“It’s funny, I don’t think it has translated as much to my personal life because I don’t think the calm and centered mindset has been as much of a needed skill.  My kids are great. We don’t have problems. If we had more challenges with raising the kids and managing a household it could become a much more needed skill, but my wife, Lianna, does a great job with the kids and the household.  My home is a break from the stress of work.  I don’t mind parenting… changing diapers, bath time, that’s a break.  Hopefully it’s the same in 10 years.”

You came up with the idea to teach a Little Dragons class.  How did this come about?

On top of everything else you do, how do find the time to do this?  “One of the things we do a lot at home is play judo.  I’ve been doing that for ages with my son and now that McKenzie a little older she joins in and they love it! I was at home going through some techniques with them and Julian has a pretty sick osoto gari and tai otoshi he’s put it together pretty good! They liked it so much at home I thought why not do a class for other kids his age.  The class just sort of built itself up.  We’ve been doing this for 8 months and there’s between 12-14 kids.”

What makes the Little Dragons program so successful?

“First, I have kids that age so I’m dialed in.  Second, we keep it fun and interesting with things they want to do at that age.  They love running around and we try to organize the chaos, we keep it simple where they are achieving things.” It’s obvious that Andy is passionate about this program as he continues “They get a big kick out of it.  They love judo tag, which is tag, but you have to do a movement before you get up! They love it!  They get all excited about all the different movements.  I think they like it because they are learning cool stuff and making progress.”

He thoughtfully adds, “Most of them have made a lot of progress – They have better focus, listening, and attention. And you can see the motor skills improving in all of them. We have some of our older students that are doing phenomenal! The improvement is very noticeable. They are almost ready to graduate to the kids karate or judo class.” Andy dreads the day his “senior” Dragons are going to get promoted to the older kids karate and judo classes.

Do you have ideas/thoughts about the experience of training at JMAC?

He responds “It’s a big question.” Hold on for the incredible ride.

“It’s a great place to train.  You’re supported, it’s positive, and there’s the obligatory smack talk that encourages us to do better.  I mentioned earlier the mutual welfare and benefit, it’s really apparent everyone’s given the chance to succeed and meet their potential as much as they are able to.  It’s up to the student whether they take that chance or not, but I think everyone is given that opportunity, which is very cool to be a part of.”

“The other thing is you’re given the opportunity to work with people from all over the world.   I can’t think of any other place that does that. We’ve have Satoh Sensei visit several times over the years; Nobetsu Sensei visited two years ago; Gage Sensei visited the dojo before he returned to the states and joined the instructors at JMAC,” just to name a few.

“We’ve had people come in and do seminars on knife training, small weapons training, staffs and bo’s; self-defense classes; and yoga. And there’s other cool stuff like the JMAC Tough Mudder team, Crucibles, and breathwork and meditation with Suino Sensei. There’s a real sense of friendship and camaraderie at this place. I can’t think of any other dojo that puts all that stuff out there. You have relationships within the states and all over the world.  That’s huge.”

“The mindset is also big, I think.  The goal here is not to train to win, it’s to better yourself and better your partners. I think people here are legitimately happy or pleased when someone else gets something meaningful out of their training or meets a milestone or succeeds in a task. I know that we use belt-ranking, but most people here appreciate the experience of working with the other person, regardless of their belt-level. The focus is not on promotions, but rather personal growth. 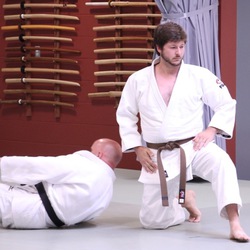 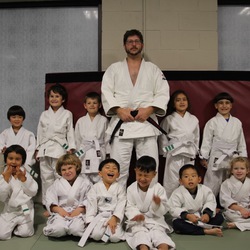 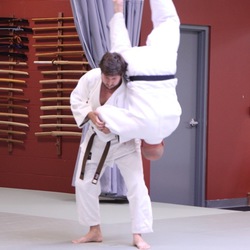